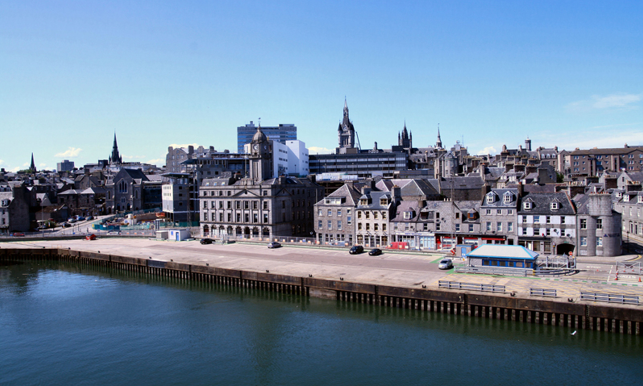 How to travel to Aberdeen

Aberdeen’s international airport is served by a number of major carriers, providing an extensive network of routes throughout the UK, direct to Europe and worldwide through major hubs. British destinations include three London airports (Heathrow, Gatwick and Luton – just over an hour’s flight time at fares from £50 return), Birmingham, Bristol, Durham Tees Valley, Exeter, Humberside, Leeds Bradford, Liverpool, Manchester, Newcastle, Norwich, Nottingham, East Midlands, Southampton, as well as the Scottish Highlands and Islands. Other destinations include Amsterdam, Bergen, Brussels, Copenhagen, Esbjerg, Faro Islands, Oslo, Paris, Stavanger and Tenerife. There is a frequent bus link to the city centre, and taxis from the airport to the University cost around £15.

What’s it like to live in Aberdeen?  Okay, so by American standards then the distance between any two points in the UK probably look quite modest, but tell an English person that you’re going to live in Aberdeen and they’ll probably ask, why are you going all the way up THERE? There are actually a lot of very good answers to that question–in fact a survey in 2012 pronounced Aberdeen the happiest place in Scotland!  Probably something to do with all the oil money which has been rolling in there, but also no doubt the fact that the city has bags of personality. A granite city by a stately sea whose residents have a grit, integrity and ready wit to match, many students choose to stay forever. Just be warned, you might need to put in some work learning to understand the local accent!